Zemsky is a premium craft beer, born of a desire to bring back full flavored quality beer and traditional brewing methods which have often been lost due to modern day drives for greater efficiency and mass production. Our mission is also to learn about and deliver the best international beer styles to Czech consumers and enable them to experience less traditional beers.

We use the highest quality ingredients, traditional brewing methods and innovation to bring a range of full flavored beers to Czech beer enthusiasts. We of course only add Czech ingredients to our bottom fermented lagers and original country-of-origin ingredients for our international beers where possible. Our brewing methods are traditional, yet we also strive to innovate to create a diverse pallete of tasty beers with real character. 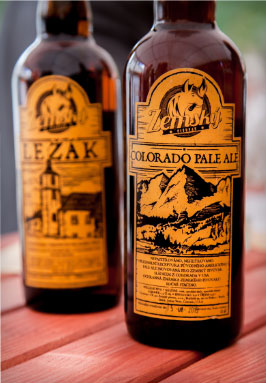 The name Zemsky (of the land) was chosen to represent the all natural ingredients and traditional craft process that go into making our beers – barley, hops, water and yeast – purity of production as per the traditional beer laws of yore.

The dog in the logo with the flaming torch in its mouth is Domini Canis – “the Lord’s dog” – a symbol of the Dominican Order now guarding their brewing tradition under the auspices of Zemsky brewery. Legend has it that St. Dominic’s mother had a vision of a dog with a flaming torch in its mouth jumping out of her womb and “setting the world ablaze”. Thus she decided to name him “Dominicanus”. Legend also has it that a star appeared on his forhead during his christening.

Both these legends are now encapsulated in the Zemsky logo and whilst we are no longer at Dominikánský dvůr and have a new location, it serves to remind us of our own legend and history – where we have been, what we have gone through and to inspire us for the road ahead.